Here I document a case of compiling on Lubuntu 14.04 and flashing with lpc21isp through the openOBC's micro-USB port. This is what I'd recommend as probably the most supported setup.

The same steps can work on a variety of systems, but I'm doing this with a fresh install of Lubuntu 14.04 in Virtualbox. A normal install will have just about everything we need out of the box, but we'll probably have to install an arm-none-eabi toolchain and lpc21isp, and we may have to install git.

Lubuntu does have a gcc-arm-none-eabi package in the official repository, but there seems to be a problem with using it to compile the firmware, so we need to still use the gcc-arm-embedded one for now.

After adding the PPA, we need to increase its priority so the packages from the official repository don't get accidentally installed instead. We can do that by creating a file /etc/apt/preferences.d/gcc-arm-embedded with contents: 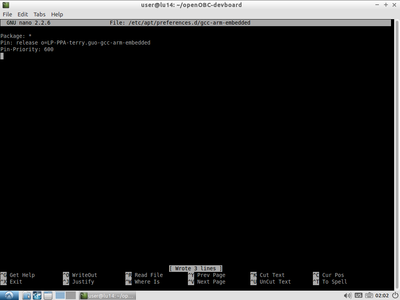 Now we can proceed to install the toolchain:

If we don't have git already, we'll want to pick that up first:

Now we can get the latest openOBC firmware source straight from github: 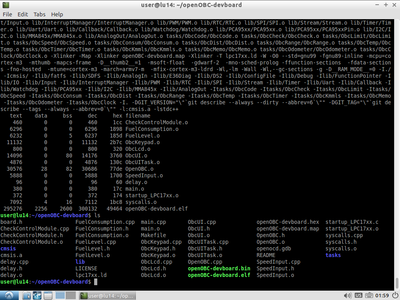 We'll need to get lpc21isp if we don't already have it:

Now we can actually flash the new firmware. The openOBC board has a micro-USB port labeled USBDEVICE which can be used to flash the firmware. The cable needed is USB A male to micro-USB B male. Lots of Android phones and other devices use such cables, so I already had a few.

Since I'm using Virtualbox, I have to be sure to tell it to pass the USB device corresponding to the openOBC (FTDI FT231X) to the virtual machine:

With the OBC connected to power and the micro-USB cable connected to the computer, linux should pick it up and produce a new /dev/ttyUSB* device file. You can verify this by checking the output of lsusb as well as the existence of the new device file: 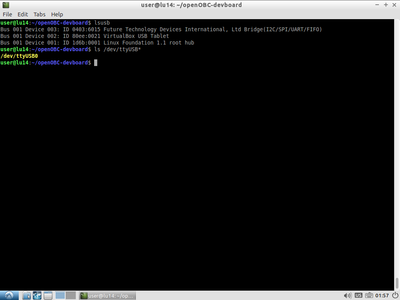 So in this case our device file is /dev/ttyUSB0. That means we can flash the new firmware file like this:

This takes a minute or so. When it finishes, lpc21isp will keep the terminal open so we can view the debug output when the firmware launches. Once flashing is complete, pressing the RESET button on the openOBC will launch the new firmware. The debug output makes it immediately obvious that the new firmware has indeed booted up: 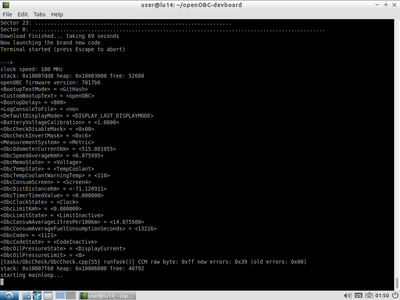 If anything goes wrong during the flash (like an untimely disconnection of the power cable) we can just run lpc21isp again, taking care that ttyUSB0 hasn't perhaps changed itself to ttyUSB1. We're using a bootloader in the ROM of the LPC1769 to do the flashing, so it isn't possible to overwrite the bootloader or otherwise prevent it from operating. lpc21isp will reprogram the flash from any state.

If at any point we just need to get back to a known good firmware, flashing one of the firmware downloads on this page will restore the firmware to the latest stable version.

After a first successful flashing, the next thing I'd do if I were interested would be to install KDevelop to use for browsing and editing the source code. I'm considering another post to go over making some small changes to the firmware with KDevelop, testing them, and committing them with git.

It's great seeing new features added on top of the already great feature list from the oem OBC. I can't wait to eventually get one of this things, hopefully write plugins / tasks for new sensors.

Keep up the great work.